Manchester Uni students said if they saw silverfish in the hallways, ‘politely tell him to leave’

University of Manchester students have been told that silverfish are a “normal feature” of their halls and if they see an insect, “politely tell it to leave”.

The £115-a-week Whitworth Park students had raised the issue with a member of the Residential Life (ResLife) team, but the member of staff had told them they believed ‘nothing could be done about this subject”.

Writing to students in October, the staff member added: “This has been an ongoing problem for years and is unfortunately a normal feature of Whitworth Park.”

However, tonight the University of Manchester claimed it always responds to issues when it becomes aware of them, saying they are “dealt with immediately”.

A spokesperson told The Manchester Tab: ‘We would never rent an unsuitable property to a student. Health and safety inspections took place over Christmas and no significant issues were reported.

“We are working with the maintenance crews and our pest control contractor to try to identify and fix any entry points.”

Students currently living inside the halls of residence paint a different picture. Eden has lived in Whitworth for two years. She told The Manchester Tab: ‘Everyone I know in the halls of Whitworth has complained about the silverfish.

“These are the 16 people I’ve lived with, the last eight and eight this year, plus four to six people in other apartments.”

Silverfish tend to like moist, dark spaces, but Eden explained that they’re so common in Whitworth that she’s had them in her bedroom, kitchen, toilet and showers both years.

Tomás, a sophomore who lived in Whitworth last year, also said the pests were prevalent in the accommodation.

While saying his apartment only had one silverfish problem, he added: “I know most of my friends in other apartments have had much worse problems.

He said he knew of “at least a dozen apartments” with a silverfish infestation and that “almost everyone was complaining about it”.

An estimated 350 University of Manchester students are currently withholding their university rent payments in protest at their living conditions and the amount they have to pay for it.

While the students would continue to live among the parasites, the university accused those same students of inflating the number of people who actually attend.

The university claimed Manchester Rent Strike was ‘guessing’ how many students participated and that the group was ‘wrong’.

In response, Manchester Rent Strike told the university to stop “attacking its own students” and instead “focus on tackling the cost of living crisis” and “support its students by lowering the rent in residences”.

The Manchester Tab revealed earlier that halls have grown nearly 40% above inflation since 2004 – the year most first year students were born.

At the top of the pile was Whitworth Park, which saw its rent rise 55% above inflation. Prices currently start at £115 per week. However, in 2004 it was only £52 a week. Using the Bank of England’s inflation calculator, if the 2004 price rose in line with inflation, rooms would cost £86 per week. 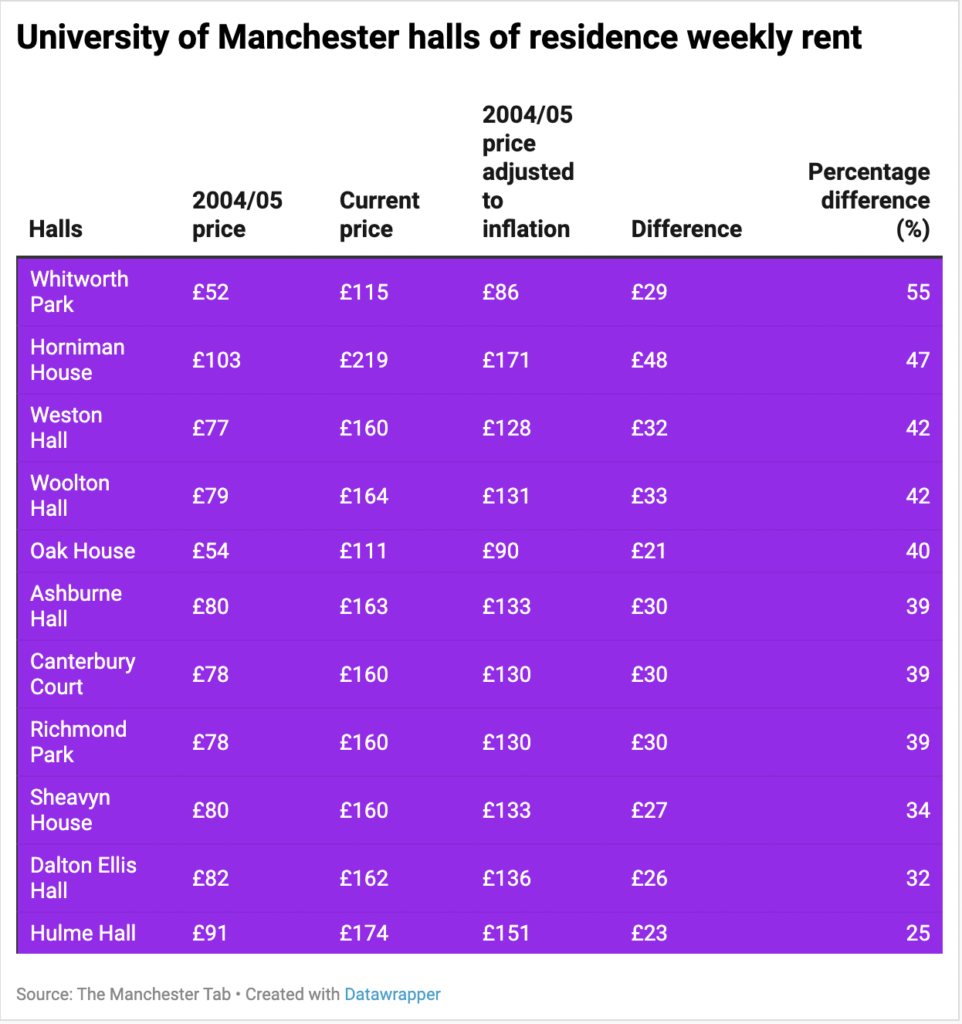 A University of Manchester spokesperson said: ‘When we become aware of issues, we always respond. We are working with the maintenance crews and our pest control contractor to try to identify and repair entry points. All residences are cleaned twice a week by cleaning services. This is a partnership to supplement the cleaning that residents would do themselves.

“Regular checks on the condition of our residences are in place. We would not rent a property unsuitable for a student. All reported issues are addressed immediately. Health and safety inspections took place over Christmas and no significant issues were reported.

“We maintain a pest control contract which provides for professionals to visit university residences eight times a year to carry out inspections and carry out our preventive measures. Additionally, we have a responsive service that responds to issues raised through the building maintenance reporting system. The contractor will continue to monitor and perform follow-up treatments and inspections until no more activity is detected. »

Related stories recommended by this writer:

. The students Manchester United have said if saw of the fish silver in the halls tell him politely leave

Council told not to ‘sit on the fence’ during Six56 inquiry

Council told not to ‘sit on the fence’ during Six56 inquiry

Ukraine war – latest: Russia hints it will do something to ‘get the world’s attention’ on Feb 24